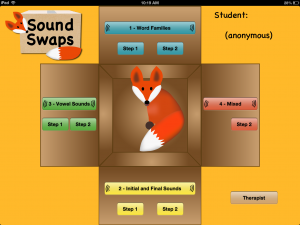 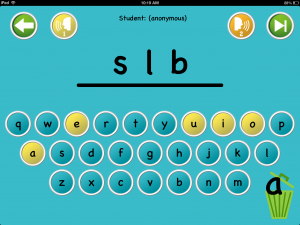 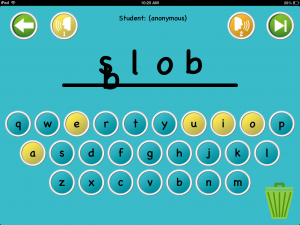 The goal of SoundSwaps is to assist students to improve decoding and encoding skills through improved auditory conceptualization. (It’s great practice for all students, but was originally designed for students with dyslexia and auditory processing disorders.) Students will practice seeing and hearing words and learning where and when sounds are deleted, added, or moved to make new words.

Some students have difficulty with awareness of individual sounds in words, of whether two sounds are the same or different, and of the order in which to put them to form a specific spoken (or written) word. These students have difficulty with discriminating speech sounds in sequences and perceiving and comparing the different patterns in sequences in words. They cannot judge the differences between sounds and may delete or add sounds and syllables from words.

This app uses errorless learning. The app repels incorrect choices without drawing attention to the error. There is never a “No” or “Incorrect” message, no negative feedback, no red X. Just a subtle refusal to go someplace incorrect, and then visual cues for correct responding.

The positive response is continuous. There is verbal reinforcement after every trial. There is greater reinforcement after each sequence of changes. The letters spin, jump, and fly off the screen at the end of each string of words, with accompanying whistles. And there is applause with whistles after completing each level.

In the SoundSwaps app, letters come onto the screen one at a time. When all of the letters are on screen, it says the whole word i.e. bag

Then it says: If this says “bag” make it say “bat”

Speak 1 and Speak 2 buttons allow the user to hear the words repeated as often as necessary.

There is a trash can on right lower corner of the screen into which letters that are not needed in the new word are dragged, so that they can be replaced with the new letter. Alternately, dragging the new letter on top of the old one will simply replace it.

An on-screen keyboard pops up with consonants in blue and vowels in yellow. When the correct key is touched the letter pops out from it to be dragged up to the word. (The key with its text remains in place.)

In Step 1: Some keys are hidden; reducing the complexity of the task.

in Step 2: The full keyboard is used, still with the colors differing for vowels and consonants.

On the keyboard only the correct letter key can be dragged up to the open space in the word (the key itself doesn’t move – the letter remains on the keyboard, but a duplicate moves up, as stated above).

After 2 incorrect tries (touches to wrong keys on keyboard) the correct letter(s) will highlight and pulse (in sequence if more than 1) as prompts/cue.

The data tracker will track % correct and % prompted, which activity, which level (1 or 2)